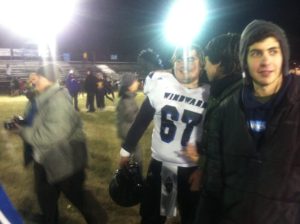 Back in my high school football days, I remember the emphasis put on practice. We never faced another team without hours of game footage and drilling formations until they were automatic. There was nothing to think about. Do it like you did a thousand times in practice. “Go out and execute,” Coach would say.

Junior year, we made it to the CIF championships. Our rivals were the consensus best team in the division with five lineman averaging 300 pounds. They were physical and brutal, earning their reputation for literally steamrolling all opponents. Our execution got us the win, but just barely.

Senior year, we kept winning, but so did they. The idea of going up against them again was daunting. And this time, they knew to expect us. If we wanted our second championship, we needed to prepare.

We played every game that year as if it were against our championship rivals. We practiced techniques, plays and formations. We learned to trust each other and we became an even more cohesive unit.

When we finally faced them in the championship, they didn’t stand a chance.

This is the power of simulation, of thinking through your desired outcome, working out your execution and practicing with your colleagues. You get the experience into your muscles. You make it habit. You embody the end result. You continuously learn and improve. And you do it together, not just individually. Then, when it counts, you walk out onto the field for the first time as if you had done it countless times before.

This is why game-based learning is sweeping the business world as a tool for creating rapid change. How often in business do we talk about how we “play” together? And how much better would we play if we had a practice of working on our game?

Use business simulation to step up your game. Let’s play FreshBiz.
For more info, email me at sharon@thinkbusinessgrowth.com.